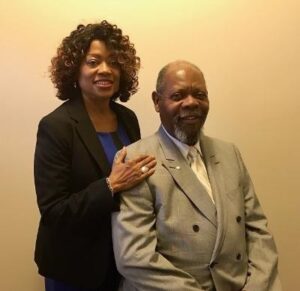 Pastor, William Jones, Sr. is a native of Washington, D. C. He accepted Christ as his personal Lord and Savior at the early age of ten years old. He attended the District of Colombia public schools until he entered the United States Army, February 8, 1968. Reverend Jones’ career in the military began in the Republic of South Vietnam, he has served in Korea, Germany, Okinawa, and Somalia.

Pastor Jones is the 1st African American called to Pastor FHBC since its founding in 1953. Pastor, Jones was ordained as a Deacon while serving as a First Sergeant in the United States Army, Fort. Lee Virginia.

He received his Bachelor of Arts in Theology from Washington Bible College, Lanham, Maryland. Reverend Jones completed his Graduate Studies at Howard University School of Divinity, and graduated May 2004 receiving his Master of Divinity Degree.

He served as Founding Pastor of, a Branch of Zion Baptist Church in Washington, D. C. for three years.

Our 1st Lady Jeretta M. Jones whom we fondly Call (Jerri), is a native of Halifax Virginia. She graduated from Halifax County Senior High School, Halifax, Va. As a member of New Zion Baptist Church, Va. She Sang with The Martin Sister’s at churches and Theaters through out Virginia.

In 1973 She became a member of Marshal Heights Baptist Church, Washington DC. She sang with (Jack Taylor), Gospel Choir and appeared on DC’s Gospel Tv Show, Spread a Little Sunshine on Sunday Morning.

She then moved to Bremerhaven Germany, where she served as Chaplin with Protestant Women of the Chapel (PWOC), and at Andrews AFB, Suitland Maryland.

Our First Lady was ordained as a Deacon at Zion Baptist Church, Washington DC, by then, Rev., Dr. Emil Thomas, Pastor. She served on the Young Adult Usher Board and work with the Youth Group there.

She later joined Forest Heights with her husband of now 42 years of marriage and five children, Pamela(deceased), William Jr, Opal, Jennifer, and Stephanie.

Jerri joined the choir and is now a member of the praise team. Our 1st Lady serves with Vacation Bible School, the Women’s Ministry, children’s church and is  most fondly noted for  directing  the Play “Flight 309”.

As a member of Rolling Thunder assisted in feeding the homeless veterans during “Winter Haven” a program of the Washington, DC Veterans Hospital. This program provides food, clothing, healthcare, free coupons, and other needed items for every winter.

Member of Rolling Thunder Maryland Chapter 1 (September-2006-2010). This organization’s mission is to publicize the Prisoner of War/Missing in Action (POW/MIA) issue; to educate the public that many American prisoners of wars were left behind after all previous wars.

And to help correct the past and to protect future veterans from being left behind should they become prisoners of war or missing in action. We are also committed to helping American veterans from all wars.

Former Member of Rolling Thunder Maryland Chapter 3; (October 2004 to September — 2006) our mission was to bring all veterans back home from all wars, past and present. We pushed the United States Congress to work with all countries, the United States has had a war or conflict with, and any military personnel that have not returned home and or not accounted for is returned. (Our organization is not a motorcycle club.) We attend funerals at the request of the family, feed homeless veterans, provide escort service for our veterans at Charlotte Hall Veterans Home, and donated a washer and dryers to the Soldier and Airman Home of Washington DC.

Lifetime Member Disable Veterans Organization (DAV) an organization that gives support to our veterans who need assistance with submitting disability claims. They aided active duty soldiers’ families while serving on the War on Terrorism.

A member of the Veterans of Foreign Wars (VFW) Post 9617 (VFW) Suitland, Maryland. The VFW provides numerous services to military service members and their families. The three main efforts of the VFW Military Services department are: Military Assistance Program (MAP); VFW Operation Uplink was launched in 1996 to connect active-duty troops and hospitalized veterans with their loved ones; Unmet Needs Program. With the help of corporate sponsors like Vermont American, the VFW Foundation receives funding to establish, administer and promote the Unmet Needs Program.

10:00 am right before our worship service

Come join us every Sunday at 11 AM